As a part of a trend Germany became the latest defending champions to make an early exit from the Group stages in FIFA World Cup when they lost to an average South Korean team. All Germany needed to qualify to the knockout stages was a goal against minnows South Korea, which evaded them in the entire match. They were crashed out in an abject fashion conceding two goals in the injury time when they desperately chased for a goal which would have sent them through. The German fans and football lover all over the world were in a state of shock and disbelief when the final whistle was blown by the American  referee Mark Gieger.The defending world champion played poorly against South Korea, but the problems for Die Mannschaft started much earlier than that.Now where did it all go wrong for the Germans? Let’s analyze the three factors that led to Germany’s downfall in World Cup 2018.

It was the first time since 1938  in the history of FIFA World Cup when Germany could not qualify from the group stage and the only time they have finished last in the group. We have always witnessed the pedigree of Germany’s football as ‘never say die attitude’ with a fiery team spirit and a fast paced modern gameplay. But now the current holders have become the latest infamous team to exit the tournament from the group stages. Arguments will continue in the footballing world regarding their historic downfall but one thing is for sure that this current German team lacked team spirit, flair and looked extremely complacent in all the matches they played in Russia. 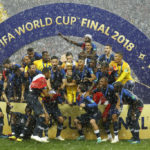