Football is not just a sport, it is a religion in Kolkata. Football is the biggest passion in Bengal and it is being said that when a child is born in Kolkata he either 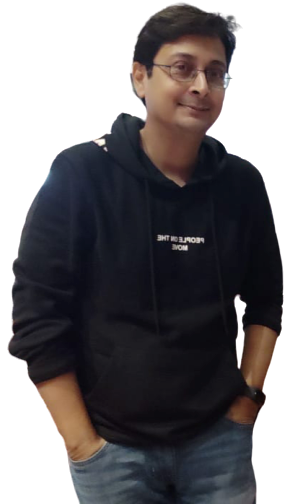 grows up supporting East Bengal or Mohun Bagan and Brazil or Argentina. The city’s love and passion for the game have attracted soccer legends like Pele (1970), Maradona (2008,2018), Oliver Kahn (2008) and Lionel Messi (2011) to come here to witness the peerless love and madness for football. Growing up in a household filled with a mix of East Bengal -Mohun Bagan supporters on one side and Argentina-Brazil supporters on the other, it was but obvious to fall in love with the sport. I started following football from a very early age and have actively played it in school and college. Later, I represented my office team in various tournaments. I used to play as an attacking midfielder and has assisted and scored plenty of goals for the teams I represented. I love and worship the Brazilian Ronaldo (R9) and like many believe that he was one of the fiercest strikers of all time with the highest skill set. His contribution to the game has been immense and during the 2002 FIFA World Cup finals, I felt that my prophecy concerning the tournament was turning to reality and discovered that I have an affinity and inclination of picking up the technical know-how of the game. Now, I have developed it into a sole passion and am assisting a few sports reporters with match reviews and in-depth player analysis of national and international matches.

Football has always been one of mankind’s greatest pastimes and it’s no doubt that a job in football is something that many people out there are seeking. I was one such individual who wanted to combine my passion with my work through a career in the international football industry. But as I was already in a service at a young age I could not pursue my passion. But gradually I studied more about the sport, its technical know-how, and developed knowledge and interest. I felt I was a decent writer so I thought I’d take a look around for some writing blogs on football. Hence I created my own blogging site https://soccerinmymind.com. Not only I will be dealing with what interests me, but I may also just end up earning myself a position where my opinions about the game will not only be heard by my mates at the pub but by an entire nation. That prospect is very appealing and the road to it is a rather simple one to follow. I will hope that any budding blogger reading this piece of mine should find some useful information on their journey to being a writer.