The Confederation of North, Central American and Caribbean Association Football, best known as CONCACAF in short has only three teams participating in this edition of FIFA World Cup 2018. The teams are Mexico, Costa Rica and Panama. Panama is set for their maiden World Cup finals. Let us quickly analyse the teams in contention and their chances of progression in the cup.

Mexico is undoubtedly the biggest and most consistent team from the CONCACAF region when it comes to FIFA World Cup. As expected they finished first in the qualifiers and hope to once again impress the world with their attacking yet compact game play. They have a nice balance of youth and experience which will be an advantage for the team. Since 1986, Mexico has qualified in all the subsequent World Cups. They were banned from the 1990 World Cup by FIFA because their junior team illegally used four players who were over the age limit in the qualifying stages of a tournament. Mexico is one such team which has put up a consistent performance in every World Cup finals they have participated.  They have never reached the semi finals; although they came very close to qualify in 1970 and 1986 World Cups. They have qualified for the knock out stages every time since 1994. Although in Russia, they have been placed in a difficult group (Group F) with teams like Germany, Sweden and South Korea, they will be favourites to qualify with Germany to the next stage. They have a whole bunch of established players in Javier Hernandez (West Ham United), Jonathan dos Santos (LA Galaxy), Guillermo Ochoa (Standard Liege) and Hector Moreno (Real Sociedad). But their best inform player is the 22 year old youngster Hirving Lozano who plays for PSV Eindhoven (Netherlans) .He’s a winger with a lot of pace, dribbling ability and great ball control. He is their key man in Russia.

Costa Rica will play in their fifth FIFA World Cup finals in Russia. They were the surprise package in the last World Cup in Brazil, where they topped the group which consisted of heavy weights in England, Italy and Uruguay. They narrowly lost to Netherlands in the quarter finals in a heart breaking penalty shoot out. In this campaign they crossed their qualifying hurdle more or less smoothly. Although they topped their group stage, the finished second to Mexico in the final round from the CONCACAF region. Their Coach Oscar Ramirez has kept the same base of players from the 2014 World Cup which might be an additional advantage to Costa Rica. Their key players are Keylor Navas (Real Madrid, Spain), Captain Bryan Ruiz (Sporting Lisbon, Portugal) and Joel Campbell (Real Betis, Spain). They have been grouped with Brazil, Switzerland and Serbia in Group E. If Costa Rica can replicate their form from last World Cup, then we might witness a big surprise in Russia.

With a population with just over 4 million, Panama is one of the smallest countries ever to secure qualification for the World Cup finals. This is will be their maiden participation in final stages of FIFA World Cup. Their qualification was just like winning a multi-million dollar lottery ticket. United States surprising lost to Trinidad & Tobago and on the same day Panama defeated Costa Rica with a dramatic late goal from Roman Torres in the 88th minute of the game which saw them through to Russia. Panama President Juan Carlos Varela declared a public holiday after their qualification from the CONCACAF region. The whole country became ecstatic and went into a trance. Now in Russia, they are housed with power houses in England, Belgium and Tunisia. Qualifying from this group to the next stage will be nothing less than a fairy tale for Panama. They aren’t a spectacular team but they have shown enough grit and determination to qualify. A lot will be expected of senior players like Roman Torres (Seatle Sounders,USA), Gabriel Gomez (Atletico Bucaramanga,Colombia) and Luis Tejada(Sport Boys,Peru).

How will the Asian contingent perform in Russia? 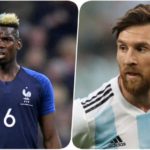