Tomorrow evening Argentina will go face to face with France in their crucial round of 16 match in Kazan.  France tipped Denmark in Group C to finish top whereas Argentina just about finished second in Group D. But both the teams looked far from their best in the group stages. France scored only 3 goals in their group encounters out of which one was an own goal and other the goal scored was from a contentious penalty decision. Argentina meanwhile just squeezed into the knock out stages from a 86th minute Marcos Rojo strike against the Super Eagles in their final group match. Let’s now do a quick analysis of the teams and find their possible line-ups.

Didier Deschamp’s men are yet to convince the footballing world of their favourite tag with lacklustre displays against Australia and Denmark. Australia gave them a very tough time on field and two very lucky goals saw the French team get past them. Denmark held France to a goalless draw in a match where the former dominated proceedings. It was against Peru that France showed a glimpse of class and quality they possess but still could not score more than one goal. The Coach might not be too concerned about their performance till the time they are winning games and getting towards their goal of lifting the World Cup for the second time. On paper France has the best squad depth and has almost tested everyone in the squad with some game time. Their defense looks the most compact and in-form department within the team. Varane,Umiti,Lucas Hernandez and Sidibe have all looked in good shape and has a superb understanding between them. In midfield Kante has been outstanding but a lot more is desired from Pogba and Matuidi. Their has been a scarcity with passes in the final third.Poigba has to be more creative moving forward. Upfront Griezmann’s form is the most worrying factor for Deschamps. He has looked far from his best in the group stage and has only scored once through a penalty. Mbappe and Giroud has been relatively more consistent and has created problems for their opponents.Nabil Fekir has looked more threatening and may squeeze into the starting line-up replacing Giroud.

Argentina’s passage to the knock-out stages was nothing more than an action packed Hollywood movie.A goal from the unlikeliest source in the dying minutes in their final group encounter versus Nigeria ensured their progress. Argentina has been below par with their overall performance and Coach Sampaoli has very little time to rectify it. In the first match against newcomers Iceland they were held to a draw and in the next match against Croatia they were drubbed badly by 3-0. All the departments of the team are in poor shape. Argentina’s defensive line looks worse than any reserve side. Cabellero’s comic bloopers are still providing a much needed comic relief in such an intense and tight tournament. Substitute goalkeeper Armani doesnot look assured either in goal. The defensive four of Tagliafico,Rojo,Otamendi and Mercado has looked very shaky and their ball distribution has been below par. In midfield Perez ,Mascherano and Di Maria has misfired badly with the only exception of Banega who has looked the most resourceful moving forward. Aguero was been unjustly replaced by a profligate Higuan in the last two matches. Aguero looked far more deadly with his movement in the box than Higuan. Argentina’s attack has been Messi centric in most of the occasions and hence it has been easy for their opponents to read Argentina’s  playing pattern. In all the group stage matches of Argentina, Opponents have incessantly doubled or tripled up on Messi inorder to disrupt his game and nullify Argentina’s attacks. Sampaoli has to have a plan B inorder to get the better off France.Argentina’s midfield has to improve on their ball possession and create more balls in the final third for Messi and Aguero. Doubts remain on Sampaoli’s relationship with his players and the victims are very evident in Dybala,Guzman and Aguero. Dybala has been in tremendous form with his club but has been hardly utilized in the group matches. Guzman on the other hand has been outstanding in Argentina’s Superliga with his club Tigres UANL but has been not used despite major concerns in that area. A misfiring Higuan was utilised in Nigeria’s match over Aguero.

There does not appear to be a set strategy going forward for the Argentines, although that does not mean that this team should be taken lightly by France. If they play according to a proper plan by using the flanks more and allowing Messi freedom going forward then it could be an extremely difficult duel for the French team. It would not be of great surprise if we witness a brace by Messi.

The CONCACAF challenge in Russia 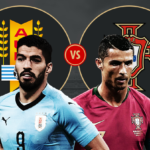 Preview of Uruguay vs Portugal’s round of 16 match