Iceland had a memorable night in Moscow yesterday when they made their debut in FIFA World Cup before fighting  valiantly and holding the mighty Argentines for a 1-1 draw. As expected Argentina dominated proceedings in the early part of the match and took the lead in the 19th minute from a fine left footed finish from Sergio Aguero. Iceland soon benefited from some shoddy defending by Argentina in the penalty box and Alfred Finnbogason capitalized. First half of the game showcased much of Argentina’s defensive vulnerability. In the second half Argentina tried to take control of the game but could not find the goal mouth before Argentine winger Meza was illegally fouled in the box and penalty was awarded to Argentina in the 64th minute. Lionel Messi stepped up to take the penalty but his shot was brilliantly saved by Iceland’s goalkeeper Hannes Halldorsson.It was a frustrating game for Messi, who had to live with Iceland incessantly doubling up on him. It was understandably not Messi’s day as he wasted a fews free kick from good position. Iceland was more than deserving of their point. Now let’s have a look at the hits and misses from the Argentina versus Iceland match.

Hannes Halldorsson(Iceland)- The 34 year old Icelandic goalkeeper may have played the most important and best match of his life. Although he could do a little with Aguero’s goal, he stopped virtually everything henceforth. He made many crucial saves throughout the match including the jaw dropping penalty save of Messi. He made a total of 6 vital saves in the entire game which helped Iceland earn their first ever point in FIFA World Cup. Rating-9/10

Alfred Finnbogason(Iceland)- He had a superb game playing upfront for his team. He posed a constant threat for the vulnerable Argentine defense. Finnbogason kept his composure in front of the goal and coolly tapped in with an opportunistic finish to equalize for his country. His overall game was brilliant as he made 2 key passes,2 dribbles and won 6 duels in the entire game. Rating-7.5/10

Kari Arnason(Iceland)- He had a brilliant game too. He was like a rock in the defense and probably cleared everything that came his way. He was equally instrumental along with his goalkeeper to keep the game at equal terms. He made 8 clearances, 3 tackles and won 8 duels in the entire match. Rating-7/10

Willy Cabellero(Argentina)- The football fraternity suspected that the goalkeeper position is one area that Argentina would have to carry as a baggage. With Sergio Romero out, Argentina had to rely only the 36 year old Chelsea reserve. He had a poor game by every standard as every shot he saved landed in dangerous areas. He was susceptible to crosses as well.He had only one decent save to his credit in the match. Rating-4/10

Lucas Biglia(Argentina)- Unexpectedly Biglia had a very quiet game. He made more of lateral passes and contributed minimal going forward. He was rightly substituted in the 65th minute. In the entire match he had zero key passes,zero crosses and no long balls. He was easily being dribbled past by Icelandic players. Rating-4/10

Eduardo Salvio(Argentina)- He looked extremely vulnerable playing as a wing back. He never posed any kind of attacking threat going in front as his crosses were often pointless and threat-free. His crosses and passes were easily dealt by the Icelandic defenders. Rating-5/10

Neither hit nor a miss:

Lionel Messi(Argentina)- His display yesterday night was not what he intended. Maybe the burden of outperforming Ronaldo has come down heavily on him. He never looked convincing while taking the penalty which was eventually saved. Quiet unlike himself, he tried to do too much himself. He also wasted a few good set pieces. But his overall game, if we see, was not at all bad. He had 9 dribbles,3 key passes, 84% passing accuracy. He also had 11 shots on goal but only 3 shots were on target. He won 14 duels to his credit.In interest of good football, we all would want Lionel Messi to prove his doubters wrong when Argentina take on Croatia next thursday. Rating-6/10 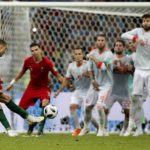 Hits and misses from the Spain versus Portugal match 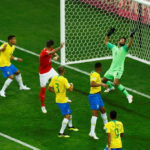 Hits and misses from the Brazil and Switzerland match