Portugal managed to squeeze into the knock-out stages in a thrilling encounter against the Asian power house Iran. The match was extremely fast paced and both the teams attacked one another frantically. Iran had plenty of chances in the counter but their inexperience in front goal denied them big time. Just as the game was rolling towards the break without a goal, Ricardo Quaresma produced a wonder goal with outside of his right foot from outside the Iranian penalty box. Beginning of the second half Portuguese fans were even more elated when referee used VAR wisely to award a penalty kick in their favour. Cristiano Ronaldo’s spot kick was saved splendidly by Iran’s goal keeping sensation Alireza Beiranvand. Iran’s relentless attack paid off right at the end when Sardar Azmoun’s header hit Cedric Soares’ arm for the referee to rightly indicate a penalty kick this time in Iran’s favour. Karim Ansarifard coolly finished from the penalty, but it was sadly not enough for the Iranians and Portugal huffed and puffed to the knock out stages.Portugal qualified from Group B and next faces Group A winner Uruguay in the round of 16. Now let’s analyze hits and misses from the Portugal versus Iran match.

Ricardo Quaresma (Portugal)-He was included in the starting line-up by Portuguese Coach Roberto Santos after his decent display against Morocco. Initially he looked a little rusty with his movement and passing but soon he found rhythm. His passing game drastically improved in the final third and his crosses in the opponents’ penalty box were a constant threat. Queresma then produced a pitch of a goal with outside of his right foot to give Portugal the lead. All positive movements upfront for Portugal came through Quaresma. His passing was immaculate with an accuracy of 88%. Rating-8/10

Adrien Silva (Portugal)- Silva’s inclusion in the team was an unexpected one by Coach Roberto Santos, but the former played an exceptional game at the heart of midfield. He did everything to help his team moving forward from building-up play, snatching balls from opponents and intricate passing with his team mates in the fianl third.Silva’s superb back heel assist for the Quaresma goal was sublime. He had a passing accuracy of 94% with 2 key passes and produced several tackles and long balls for his team. Rating-7.5/10

Alireza Beiranvand (Iran)- The 25 year old Persepolis goalkeeper had a memorable night to remember.Although he looked jittery in the opening minutes of the match, he produced some brilliant saves to keep Portugal at bay. He saved Cristiano’s Ronaldo’s spot kick brilliantly and became an instant hero with his team and fans. Rating-7/10

Saeid Azatolahi (Iran)- The Iranian central midfielder had a shocker of a game. He never looked composed with his passing and movement with the ball. His miss passes often hindered his team’s attacking play. Azatolahi gave away a penalty when he harshly tackled Ronaldo in his own penalty box. His passing accuracy was a low 66% and had no key passes,dribbles or tackles to his credit. Rating-4/10

Sardar Azmoun (Iran)- He definitely improved his game than the previous matches, but he could not really impact going in front. He looked unsure when on the ball and his passing looked very weak with an accuracy of less than 60%. He literally had zero attempts on goal which was detrimental for his team’s chances of scoring. Rating-4/10

Cristiano Ronaldo (Portugal)- It was a disappointing night for the talismanic Portugese skipper as he was literally bottled up by a robust and well marshaled Iranian defense. He had a few chances but could not add to his tournament’s goal tally. He missed the spot kick which was brilliantly saved by the Iranian goalkeeper. Ronaldo’s average passing and movement with the ball did not make much impact for his team upfront. Rating-5/10 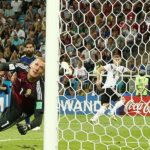 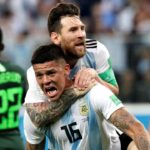 Hits and misses from the Argentina versus Nigeria match