After a disappointing draw with debutant Iceland in the opening match, much was expected of Argentina when they faced Croatia in Nizhny Novgorod. But the outcome of the match was the biggest shock of the tournament so far. Argentina was blanked by a gritty Croatian side by 3-0. This unexpected result has pushed Argentina on the verge of making an early exit from the World Cup. In the first half both the teams looked edgy with both Mandzukic and Perez missing easy chances to put their respective teams ahead in the match.A comic yet cataclysmic error by Argentine goalkeeper Willy Cabellero gifted Croatian striker Ante Rebic with a goal. From there on Argentina started chasing the game but their weak-inter passing in the final third nullified their own attacks.A stunning strike from  Luka Modric made it two in the 80th minute, before Ivan Rakitic scored from a fine close range finish in the 91st minute. Argentina’s fate is now balancing on the edge of a knife and a lot will depend the Iceland-Nigeria match. Not let’s analyze the hits and misses from the Argentina versus Croatia match.

Ivan Rakitic (Croatia)- Rakitic was instrumental in the midfield and broke up opponent’s play in the center of the park. He played some very important forward passes. Rakitic sealed the match with a fine close range finish in the closing stages of the match.In the entire match he made 3 successful dribbles,4 tackles and won as many as 13 one-to-one duels with his opponents. Rating-9/10

Luka Modric (Croatia)- The Croatian Captain was equally brilliant in the midfield. His intricate passing in the center of the park was a treat to watch. Modric’s superb curling goal from outside the penalty box will remain in our memories for a long time. Overall he had a passing accuracy of 83%, and 2 successful dribbles,tackles and key passes in the entire match. Rating-8.5/10

Ante Rebic (Croatia)- The Eintracht Frankfurt striker was full of running from the word go. His tenacity and robust play helped his team disrupt opponent’s build up play. Rebic’s acrobatic finish from a Caballero goalkeeping error was an exceptional one.Unfortunate to pick up a knock which forced him off the match in the 65th minute. Although his ball distribution was not great but he made 3 successful dribbles in the match. Rating-7.5/10

Willy Cabellero (Argentina)- He was a complete nuisance in the Argentine goal. His ball distribution and ball handling were not upto the mark from beginning of the match. His passing accuracy was low 40%. He made a catastrophic error when he tried to chip the ball over Rebic. Coach Sampaoli will surely replace him in the last match. Rating-2/10

Enzo Perez (Argentina)- Perez looked completely out of place and invisible in the match. Missed a golden chance in the first half, failing to hit the target when the goal was wide open. He was guilty of rash and reckless play and created nothing going forward. He had zero key passes, zero dribbles and won only one one-to-one duel in the entire match. Rating-2.5/10

Lionel Messi (Argentina)- Arguably this was Messi’s worst game in his national colours. He hardly got any service up in the field. The Croatian robust defense denied him of any space. He very rarely tried to make forward runs but was easily dispossessed. Surprisingly Messi looked tired ,frustrated and lost in the middle of the park. Although he made 5 successful dribbles and 2 key passes, still it was not enough to break the Croatian compact defense. Rating-5/10 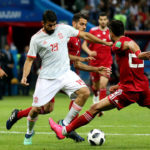 Hits and misses from the Spain versus Iran match 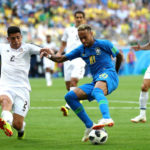