Can this Chinese Super League 11 get the better of big-name clubs? Who knows, but its quite a formidable side.

Some of the best and most talented footballers in the world have already made a move to the far east and have made the Chinese Super League the most sought after and emerging leagues in world ​football. The league has certainly picked up pace in the last 2 to 3 years not only because of the money that has been pumped but also for its competitive nature. The quality of football has been more than decent. It has certainly not been the highest quality league in the years gone by, but it is no footballing backwater now. The ​Chinese Super League clubs cannot spend randomly like before to buy big-name players just to create a ripple in the football market. As per the new rule of the Chinese Football Association (CFA), any club seen to be in debt and that spends more than ¥ 45 Million ( € 6 Million approx.) on a foreign player, or ¥ 20 Million ( € 2.8 Million approx.) on a domestic signing, will have to pay the same amount to a football development foundation under the control of the CFA. Also, the club management has been quite judicious in their approach in choosing quality players based on their team composition and requirement. 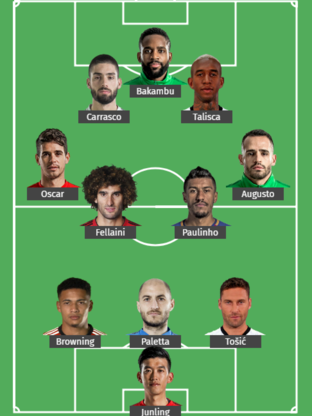 We have compiled 11 of the best and most consistent performers in the Chinese Super League, which might just hold their own against any team in the world. The team is based on a 3-4-3 formation. It is a very attacking formation, and its compact nature is ideally suited for midfield domination and ball possession.

Yan Junling (China, Shanghai SIPG)– Given the fact that in the Chinese league, the goalkeeper has to be a Chinese, ​Yan Junling easily beats all in this department. Junling is by far the best that Chinese football has produced after Wu Lei (currently playing in Espanyol, La Liga). The winner of the Golden Glove in the last two editions of the Chinese Super League is also the number 1 goalkeeper for his national team.

Tyias Browning (England, Guangzhou Evergrande)– This ex-Everton product has been an instant hit in the league since his transfer to Guangzhou Evergrande in March 2019.​Browning has represented England at under-17, under-19, and under-21 level. In addition to playing in England, he is eligible to play for China as well.

Dusko Tosic (Serbia, Guangzhou R&F)– The Serbian International has had a brilliant season so far for the league his team Guangzhou R&F. Since his transfer from Besiktas in May 2018, ​Tosic has been the team’s pillar in defense.

Marouane Fellaini (Captain) (Belgium, Shandong Luneng)– In a 3-4-3 formation, you need to have solid central mid fielders and none better than ​Fellaini. The ex-Manchester United player continues to impress the club management with a string of outstanding performances. He not only commands the midfield but also chips in with crucial goals.

Renato Augusto (Brazil, Beijing Guaon)– The 31-year-old ex-Brazilian international is in the best form of his life. He has been brilliant in the center of the park for the league leaders. Not only he provides solidity in midfield but also has been instrumental in creating and scoring goals.

Paulinho (Brazil, Guangzhou Evergrande)– The central midfielder joined Guangzhou Evergrande in 2015. His first two seasons in the Chinese Super League was a success earning him a move to Barcelona. ​Paulinho has been one of the driving forces in the side’s decent showing in the league this season.

Oscar (Brazil, Shanghai SIPG)– Of all the players who moved to China in recent years, the most shocking transfer was that of ​Oscar. His move was severely criticized by the football media. But Oscar has been worth every penny for the club. He has been in his creative best. Last season he helped Shanghai SIPG win the league title and end Guangzhou Evergrande’s domination. He even broke the Chinese league record of the most assists (18) in a season.

Yannick Carrasco (Belgium, Dalian Yifang)– ​Carrasco made his move to China at the age of 24 from Atletico Madrid. Like Oscar, his move to Dalian also amazed many in the football world. Although he had a slow start last season with his club, this season he has been in stupendous form with a string of great performances. He has been so good this season, that Carrasco has been heavily linked to a move to Arsenal this summer.

Cedric Bakambu (Congo, Beijing Gouan)– The Congolese international striker is best remembered for his explosive performance in the 2015-16 La Liga season for his previous club Villarreal. ​Bakambu joined Beijing in the winter transfer window in 2018 and became the highest-paid African footballer in the world earning an estimated € 18 Million per season. Although he has had a slow start as per his standards, his performance has been not too bad this season scoring 9 goals in 13 outings (in all competitions) for his team.

Talisca (Brazil, Guangzho Evergrande)– He rose to prominence with superb performances with European biggies Besiktas and Benfica. Often compared to Brazilian legend ‘Rivaldo’ for his style of play, ​Talisca has been an instant hit with his club Guangzhou Evergrande after his move in May 2018. He has been in lethal form, scoring almost every game. Top football prodigies who can make their nation proud